The Nevada State Railroad Museum in Boulder City is one step away from securing funding for its proposed expansion as a bill to reauthorize bonds for the project was signed by the governor after passing in the Senate.

Assembly Bill 84 proposes general obligation bonds be issued to protect, preserve and obtain the benefits of the state’s natural and cultural resources. The bill allocates $30 million for state museums, including the expansion of the Nevada State Railroad Museum in Boulder City, and money to renovate and improve the depot in Ely. “It’s spectacular,” said Randy Hees, Museum Director. “It’s a wonderful amount.”

“Passage of AB84 was truly a team effort on so many levels,” said Al Noyola, City Manager. “From the support of the mayor and council, to the efforts of City Hall staff, the determination of the Boulder City Chamber of Commerce and Economic Vitality Commission, to the leadership of Nevada state museums, so many people advocated for this bill. It is a great day for Boulder City and the entire region.”

The Nevada State Railroad Museum, 601 Yucca St., is planning to expand its facility to include a 9,700-square-foot visitors center, new boarding platforms, display buildings and linear park with interactive features for children and links to the River Mountains Loop Trail. The expansion will be in three phases and is estimated to cost $35 million.

“We will get $20 million roughly to expand our railroad museum, but it may be two years before we see it,” Hees said. Hees said he hopes they can get approximately $2 million before the bonds are sold so that the architectural work can continue and they can hit the ground running when the state money comes through.

“We’re incredibly happy and very optimistic,” he said. “We’ve worked long and hard to make the railroad museum and linear park a reality, so it’s reassuring to see this bill draw such overwhelming support from both parties in the Assembly and Senate,” he said. “This project will bring increasingly more visitors here to learn about the rich history of Boulder City.” Hees cited the city and the Chamber of Commerce’s support for the bill as “spectacular”, and said Boulder City Communications Manager Lisa LaPlante and Boulder City Chamber of Commerce, CEO Jill Rowland-Lagan were constantly testifying to state legislators on behalf of the bill. “It’s been amazing to watch,” Hees added.

Rowland-Lagan said, “Not only will this approval help us build regional tourism for Southern Nevada, it will assist in many worthy conservation programs and projects that will remind us of days behind us and will propel us with great energy into great days ahead.” Hees said he expects the expansion to be an 18-month build. 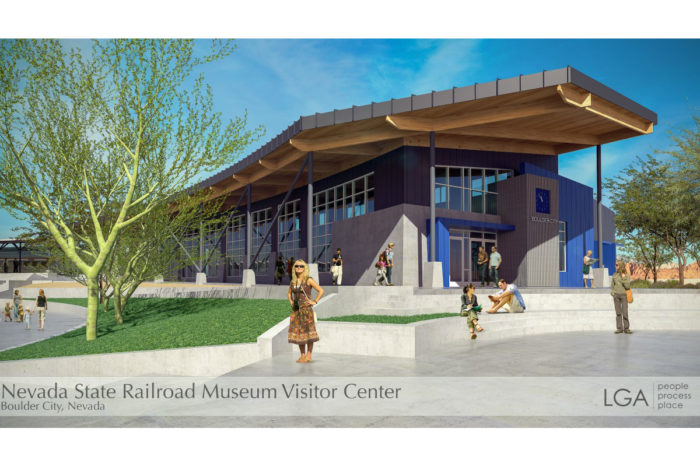 Donate to help preserve both the museum’s history, as well as our vision for expanding the museum and creating a modern new Visitor Center.

Three different Membership Levels are available, and include a 15% Discount to our gift shop and FREE included regular weekend train runs.

With over 60,000 visitors per year, we couldn’t exist without our volunteers. Not only are there a wide variety of activities, we have fun. Learn more here.

Your ticket for the: Nevada State Railroad Museum Expansion